Cha Cha with Your Partner to Move Around the Pickleball Court

When you watch a professional pickleball match, what differences do you notice in a team’s ability to move around the pickleball court? Do you see that they’re able to cut off even the sharpest of angles and make it look easy? It’s because they’ve learned how to Cha-Cha with their partner.

I’m often asked, “CJ, what’s the most effective way for me to move with my partner to the net?” It’s a pretty easy answer. If you want to move around the pickleball court with your partner, effortlessly, focus on your “dance space.”

When I’m teaching players court movement, I think of it like a Cha-Cha. Which always reminds me of the 1980’s hit Dirty Dancing. 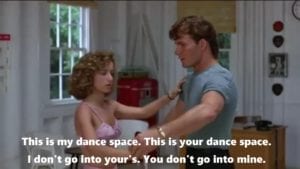 So, what’s your dance space in pickleball?

Someone may have told you to take a bungee cord or a rope and tie it around your partner and that whenever you move, your partner moves along with you. While I think that’s an excellent visual, based on what I see happening on the pickleball court, it doesn’t always help the team transition to the net. Let’s break down a team’s movement around the court a little further.

A pickleball court measures 20 feet from sideline to sideline.

As an example, I’m five feet seven inches tall, and when I stretch out my paddle and my hand, my wingspan is 72 inches.

If my partner is about my size and we account for a step in either direction, we’re able to cover approximately 12 to 14 feet of the court.

Think of “your dance space” on the pickleball court, as six(ish) feet.

When you’re at the baseline, it’s pretty easy to imagine a six-foot bungee cord between you and your partner. Unfortunately, as people begin to move around the pickleball court toward the non-volley zone, the spacing changes. Which, in turn, exposes more of the court. The easiest way for a team to maintain the spacing as the move toward the NVZ is to follow the direction of the shot.

It’s essential to be clear when we are talking about movement; we’re not focusing on the shot trajectory, only the path. If you want to learn more more about the types of shots and their trajectory, click here.

Luckily there are just three directions, down the line, to the center, or cross-court.

If my partner and I are the serving team and I’m positioned on the even side of the court and hit the third shot down the line, we should both move straight forward to the NVZ.

That would put me in a position to cover the sideline. My partner is responsible for the center and one step out wide. Those are the highest percentage portions of the court.

We’ve intentionally chosen not to cover the weak side or the court to my partners left. We know that we can’t cover the whole court, but we’ve decided to leave that open because that is the most challenging shot for our opponents to hit. It’s better to focus on covering the higher percentage portions of the court.

As we move forward, I angle a little toward the centerline and my partner a bit to the left of the odd side. Again, we are covering the portions of the court that are easiest for our opponents to hit.

I’m going to hit this from the even side over to my opponents even side, angling toward the sideline.

If we follow the direction of the ball, I’m moving closer to the middle of the court, and my partner is moving toward the sideline of the odd court.

They are responsible for the sideline, and it’s my turn to cover the middle and one step toward the weak side. Again, we’ve left the weak side open, but that’s the lowest percentage, most challenging shot for my opponents to make.

If you want some more tips on how to get to the non-volley zone, click here.